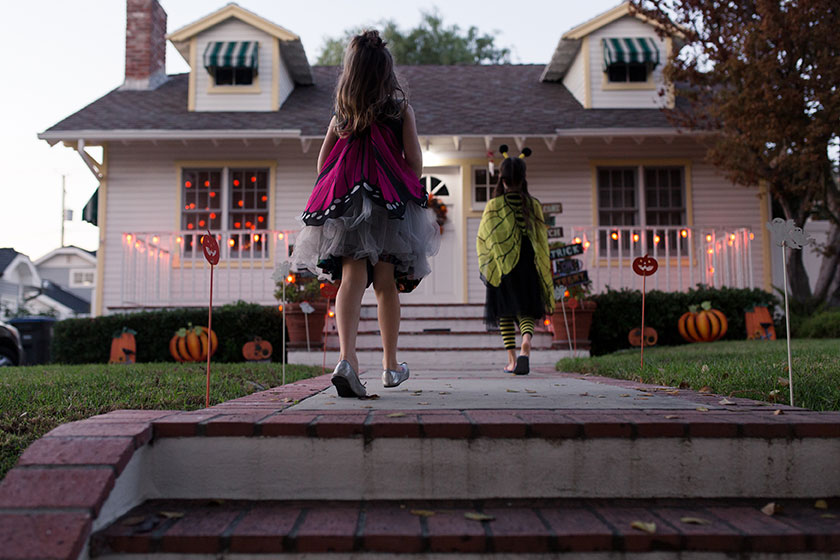 Trick-or-treating has been undergoing a cultural shift of late. Blogs, social media posts, and news articles have been questing whether the traditional door-to-door candy hunt is disappearing in favor of tamer, safer alternatives. To be sure, having children run amok in the dark comes with its share of risk. But the Halloween tradition can actually both help to bring communities closer together and serve as a measurement of family-friendliness for neighborhoods.

Known as the Trick-or-Treat Test, it was first mentioned in Portland, Oregon in 1999 when the city changed its zoning code to ban so-called “snout houses”. These homes were most popular in the 90s and feature over-sized double-car garages in front of the home (resembling pigs’ noses) and hidden, recessed front doors. These homes turn away from the street, lacking front-facing windows and front porches.

As Charlie Hales, former city commissioner (and, later, mayor) who proposed the rule commented, “Basically, we want a house to pass the ‘trick-or-treat test,’ so when kids come around to trick or treat, they actually get a sense that somebody lives in the house, and they can find the door. Imagine that.”

“It turns out this rather simple idea—could a kid find the door and easily get to the next one—is actually a pretty neat way to sum up what constitutes a well-designed neighborhood. It’s an abstract standard, I know. Different people like different things. But find a neighborhood where lots of kids trick-or-treat, and you’ll see how small architectural cues such as lit windows facing the street, parking accessed via back alleys, or slow traffic speeds foster places where people like to walk.”

While much of the Halloween discussion is centered around suburban neighborhoods, it is possible to design urban environments that pass the Trick-or-Treat test as well. Urban planner Brent Toderian has observed that walkable communities have never fallen out of favor to those completely reliant upon cars. In Vancouver, B.C., “our walkable streetscapes “by design,” our “podium townhouses,” or more recently our homes with front doors on the street at the base of mid and high-rises, make trick-or-treating a viable option in even the highest densities. Now if only kids could go from floor to floor easily in higher buildings! That’s Door Density!”

Other essential elements of a Halloween-friendly neighborhood include:

But what about urban neighborhoods with high-rise apartments instead of single-family houses? It can be difficult, given the push towards increased security – both at the street level and elevator access restricted by floor. There are options, however, if we plan for them. Designing buildings with street-level entrances, using common rooms as trick-or-treating hubs, or inventing new accessible multi-family homes that enable residents to meet, interact, and strengthen community.